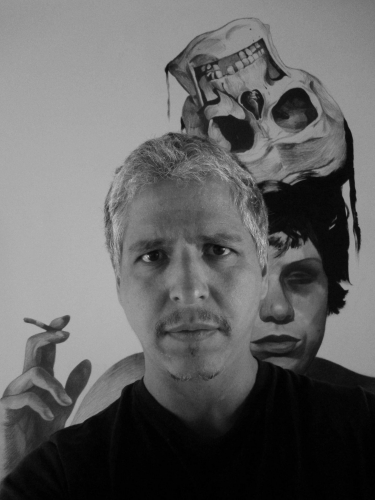 Allowing the act of drawing to organically dictate his compositions in works that range from intimate drawings to large scale murals, Hugo Crosthwaite juxtaposes a wide range of textural and tonal ranges against spaces that alternate from dense and atmospheric to flat and graphic. Two seminal series of drawings, titled Carpas and Tijuanerias, pay homage to Goya's "Caprichos" with its depiction of grotesque and surrealistic figures and themes executed in an informal, sketch-like style. His subjects—the everyday men, women and children that populate the border region of San Diego/Tijuana—are presented in a non-idealized documentary style that allows them to appear in their humble familiarity and authenticity.

Crosthwaite alternates between mythological subjects and contemporary ones, often combining the two.  Francisco Goya, Eugene Delacroix, Gustave Doré, Jose Guadalupe Posada, and Arnold Böcklin are among the many artists that have inspired his work. He also includes an exploration of modern abstraction in his compositions, which he approaches in a totally improvisational manner. The joining of abstraction with classically-rendered imagery creates a feeling of spontaneity and vagueness; each work becomes an enfoldment of personal vision in which reality, history, and mythology collide as he explores the complexities of human expression.

Hugo Crosthwaite was born 1971 in Tijuana and spent his formative years in Rosarito, Mexico.  An American citizen with family on both sides of the border, he graduated from San Diego State University in 1997 with a BA in Applied Arts.  Crosthwaite lives and works in San Diego, CA and Rosarito, Mexico. 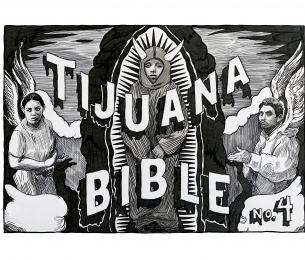 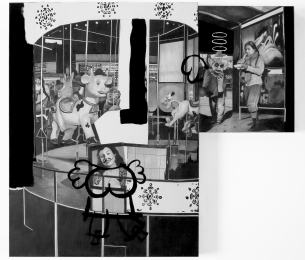 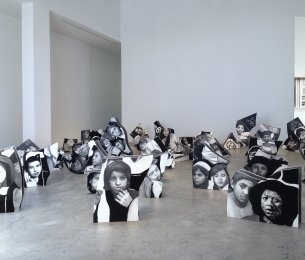 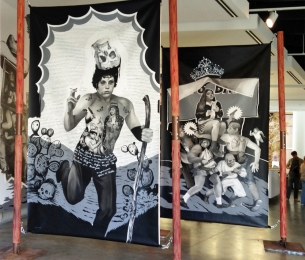 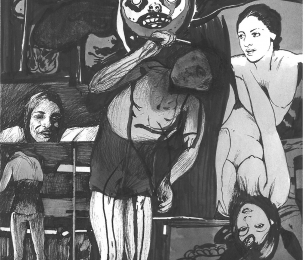 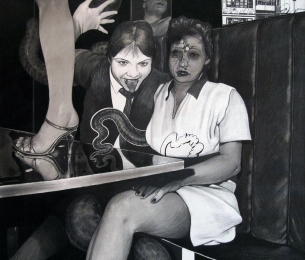 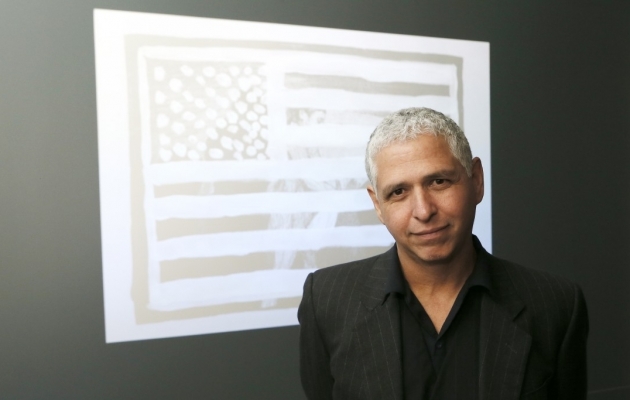 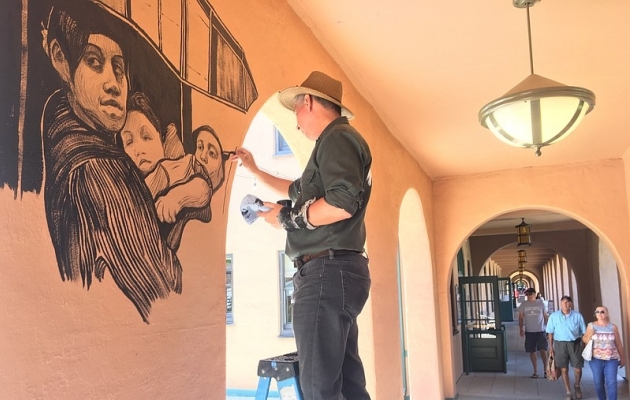 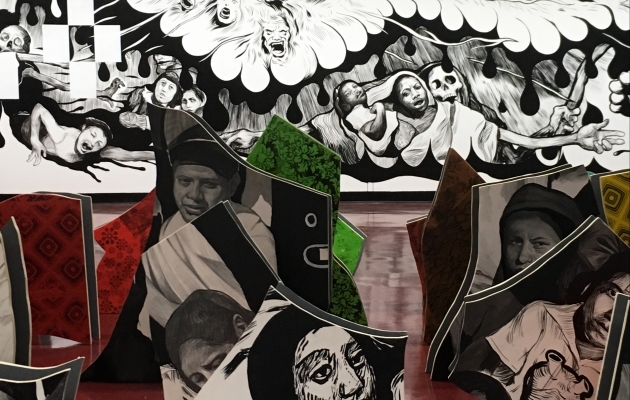 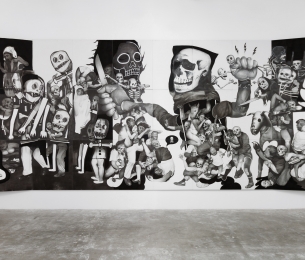 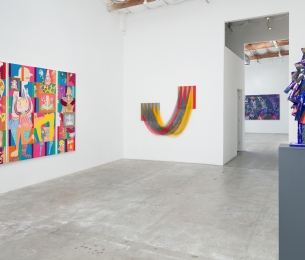 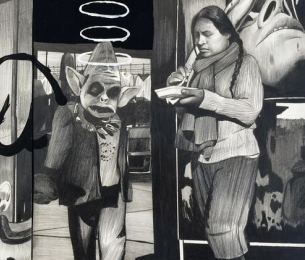 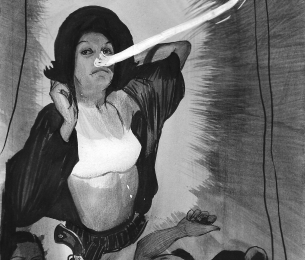 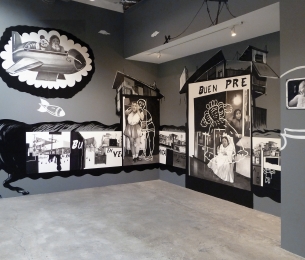 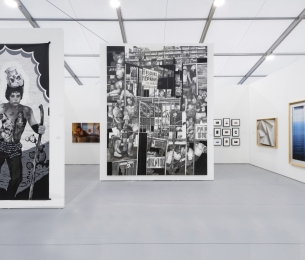 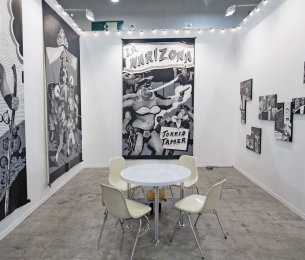 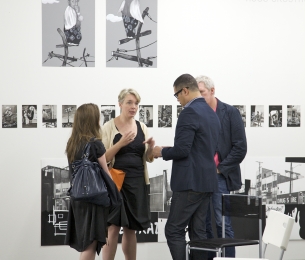 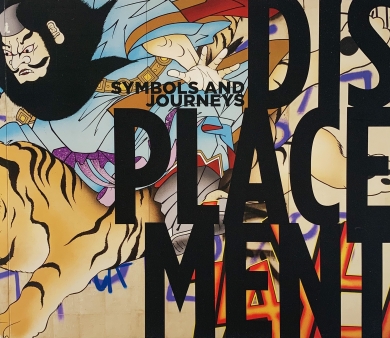 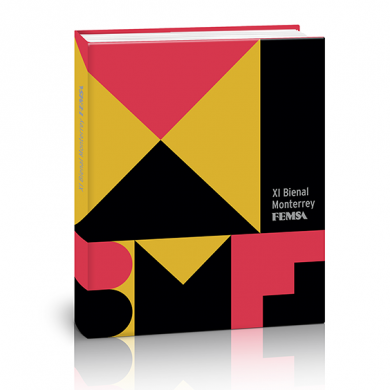 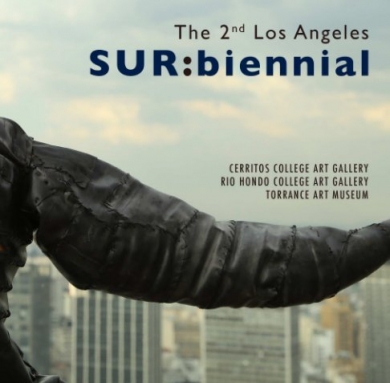 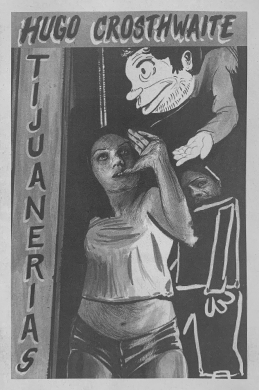 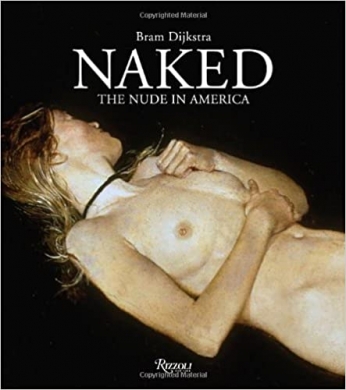 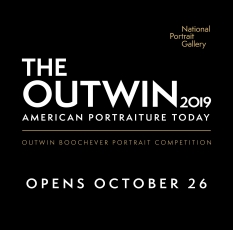 Hugo Crosthwaite’s work will be presented in The Outwin 2019: American Portraiture Today, a major exhibition premiering at the National Portrait Gallery October 26, 2019 through August 20, 2020. The exhibit will present the work of this year’s nearly 50 finalists, including seven artists that were shortlisted for prizes, selected from over 2,600 entries. As the first-prize winner, Crosthwaite receives a cash award of $25,000 and a commission to create a portrait of a notable living person for the museum’s permanent collection.

Hugo Crosthwaite, the 2019 first place winner was recognized for a stop-motion animated drawing. “A Portrait of Berenice Sarmiento Chávez” (2018) depicts a young woman from Tijuana and explores her pursuit of the American dream. The animated video project is part of a series based on oral histories Crosthwaite has gathered at the U.S.-Mexico border. There are many competitions that give promising artists a chance to submit their work, have it judged against their peers, and vie for a cash prize, exhibition opportunities, and other forms of support for their practices.

Every three years, the Smithsonian’s National Portrait Gallery showcases finalists of the Outwin Boochever Portrait Competition, named for a late benefactor. A total of 46 works are on display from the latest edition, selected last year by a panel of jurors from more than 2,600 submissions, all from American artists who were instructed to respond “to the current political and social context.” Hugo Crosthwaite’s A Portrait of Berenice Sarmiento Chávez, a three-minute video of stop-motion animation, took First Prize. 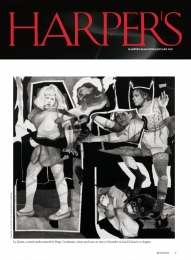 Hugo Crosthwaite's La Güera, 2018, is featured in the "Readings" section of Harper's Magazine in print in January 2020.

The National Portrait Gallery in Washington, D.C., named Hugo Crosthwaite the 2019 winner of the Outwin Boochever Portrait Competition, an astute selection for several reasons. Crosthwaite’s entry, a meditative, three-minute stop-motion animation about a woman migrating from Mexico to the United States, stretched the conventional bounds of portraiture and affirmed the genre’s relevance, both of which are aims of the prize. Over nearly two decades, Crosthwaite has applied portraiture’s concentrated attention not only to individuals but even more avidly to place.

View ArtNews.com
THE WASHINGTON POST
A NEW GENERATION OF PORTRAITS ASKS: CAN YOU SEE THESE PEOPLE? November 19, 2019

The title of this year’s winning work, by Hugo Crosthwaite, tells us the name of the person represented in the artist’s three-minute stop-motion animation of black-and-white drawings. It is A Portrait of Berenice Sarmiento Chávez, a young woman from Tijuana, Mexico, who is seeking a better life in the United States. Her face emerges from a blank space, like a piece of paper or canvas, and then we watch as her body is sketched in, as though she’s materialized from nothing. In a series of brief vignettes, we learn about the danger that she, like other migrants, has faced, including violence and sexual harassment.

The new exhibition at Luis De Jesus Los Angeles by Mexican-American artist Hugo Crosthwaite (b. 1971) grabs your attention the moment you walk into the gallery. The artist, who lives and works in San Diego and Rosarito, Mexico, created a monumental, 27-foot wide multi-panel work called Death March. Multiple human figures and skeletons compose a funeral march, appearing to honor the deceased in a manner that calls to mind Día de los Muertos, the Mexican holiday Day of the Dead.

For painter and video artist Hugo Crosthwaite, life has unfolded in equal parts on both sides of the U.S.-Mexico border, and he has come to understand that in a way the border region itself is its own nation, with a unique culture that is both blended and divided, and a population comfortable with dualities. Both his films and graphite and ink drawings on canvas—often at monumental scale—exist in a black-and-white palette and are rich with regal, stylized detail.

The painter is showing a new series of drawings, panel paintings and animations that chart the ebb and flow of humanity, along with unseen magical phenomena, in the U.S.-Mexico-border region where he lives and works. (The artist divides his time between Rosarito and San Diego.) Crosthwaite, a painter whose work is as influenced by comic books as it is by Gustav Doré, recentlywon the top prize in the National Portrait Gallery’s Outwi Boocheyer Portrait Competion, pays tributes to Goya’s Caprichos. A recent series capturing grotesqueries and folly.

The video begins with the sound of a guitar strumming and a voice singing in Spanish. The main character is sketched quickly, beginning with her eyes, then face, hair and shoulders. She gazes into the distance. Over the course of the three-minute stop-motion drawing animation video, we watch as the main character goes about her life, immigrating to the United States and trying to succeed in her new country.

Portraiture is due for a reframing. Although the art form has traditionally served to memorialize the affluent and the powerful, the finalists of the 2019 Outwin Boochever Portrait Competition point to a future where portraits empower the disenfranchised. The triennial competition, founded in 2006 by an endowment from the late Virginia Outwin Boochever, calls for artists to “challenge the definition of portraiture.” First-prize winner Hugo Crosthwaite does just that. His 2018 stop-motion animation, A Portrait of Berenice Sarmiento Chávez, illustrates one woman’s journey from Tijuana, Mexico, to the United States.

The National Portrait Gallery in Washington, DC, has announced the winner of the Outwin Boochever Portrait Competition, a triannual contest honoring artists that “challenge the definition of portraiture.” Hugo Crosthwaite, a San Diego-based artist, will take home the $25,000 prize, which also comes with a commission to create a new portrait for the museum’s permanent collection.Crosthwaite follows in the footsteps of now-veritable art star Amy Sherald, who won the last Boochever award in 2016.

The Smithsonian’s National Portrait Gallery announced that artist Hugo Crosthwaite has been named the first-prize winner of the fifth triennial Outwin Boochever Portrait Competition, which aims to reflect the contemporary state of portraiture in the United States. Recognized for his stop-motion drawing animation A Portrait of Berenice Sarmiento Chávez, 2018, Crosthwaite is the first Latinx artist to receive the $25,000 award since the national competition was founded in 2006. Following in the footsteps of Amy Sherald, the previous winner of the prize, the San Diego–based artist will receive a commission to create a portrait of a living individual for the National Gallery’s collection.

Public art is the icing on the cake in the transformation of Liberty Station from a formal, staid Navy training center into a vibrant entertainment, shopping and arts destination. This year, six artists participated in Installations at the Station, the NTC Foundation’s public art program, which will continue next year. This year’s projects included community-painted skateboards representing a wave and a ship on a rooftop, a braided rope bench inspired by the native tribes and the Navy and murals of border scenes by Tijuana artist Hugo Crosthwaite as part of an ongoing narrative in multiple locations that started in 2009.

View SanDiegoUnionTribune.com
LOS ANGELES TIMES
LIVES ON THE LINE: HOW THE ART OF DANICA PHELPS TAKES ON ENVIRONMENTAL AND HUMANITARIAN DIMENSIONS August 25th. 2018

Danica Phelps draws with uncommon grace. Her line moves with liquid ease, following the momentum of time. It describes what happens in her life, and it also makes things happen. As her beautifually affirming show at Luis De Jesus Los Angeles attests, her line has agency.

View LATimes.com
Back To Top