Please direct all inquiries to:
gallery@luisdejesus.com

In support of recent city-wide regulations and
evolving public concern regarding efforts to contain
the spread of the Coronavirus COVID-19, the gallery
is open by appointment only. 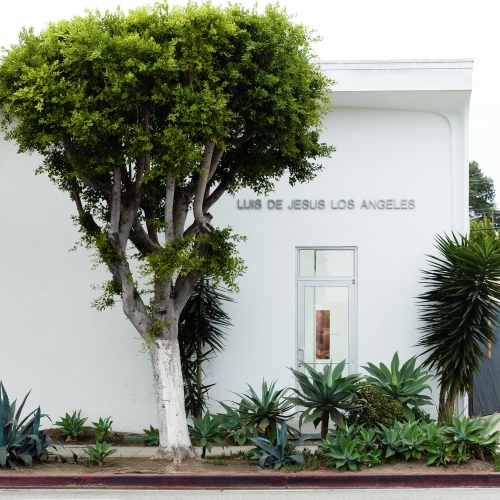 Luis De Jesus Los Angeles is a contemporary art gallery engaged in regional and global art discourse with a particular focus on intersectional diversity. We nurture and support emerging and mid-career artists using traditional, interdisciplinary, and new media methodologies. These artists use conceptual and formal strategies as a critical lens to address a myriad of fundamental and urgent concerns including the social constructs of gender, racial, and subjective identity, the power of aesthetic frameworks to shape political and economic reality, and the historical role of the artist within society.

Our artists are exhibited regularly in international institutions and biennials with highlights including: KEN GONZALES-DAY at the National Portrait Gallery in Washington DC and the Getty Institute's Pacific Standard Time LA/LA Inititiative; FEDERICO SOLMI at the 2018 Frankfurt B3 Biennial, the 2018 Open Spaces Biennial in Kansas City, and the 54th Venice Biennial in 2011; ZACKARY DRUCKER at the 2014 Whitney Biennial in New York, the 2012 Made In LA Biennial at the Hammer Museum, and at the Irish Museum of Modern Art in Dublin; and NICOLAS GRENIER at the 2015 Brugge Triennale in Belgium and the 2014 Biennale de Montréal at the Musée d’Art Contemporain de Montréal. Our artists have also been exhibited at PS1/MoMA in New York; LACMA in Los Angeles; the Museums of Contemporary Art in Chicago and San Diego; SF MOMA in San Francisco; Reina Sofia in Madrid; Haifa Museum of Art in Israel; Bonnefantenmuseum in Maastricht; Sharjah Art Museum in the United Arab Emirates; the California Pacific Triennial at the Orange County Museum of Art; SITELines/SITE Santa Fe; the Quadrinnale di Roma; the Bienal de Cuenca; and the Monterrey Biennial.