Situated within a cultural milieu where actions, objects, and behaviors are charged with meaning, Seth Augustine's art process begins with intervention-either in the form of social experimentation or public performance.  Parameters help define the limits of the interventions and generate an open space where unexpected outcomes can develop.  Informed by the discoveries and insights learned from the consequences of these actions, Augustine then articulates further artworks.  These new pieces, often a hybrid of traditional categories and contemporary art strategies, traverse a wide range of formats including artifact, sculpture, photography, installation, video, and drawing.

The works presented in Mash-Ups are based on Augustine's own experiences-including performances, collaborations, and social experimentations-conducted in China over the course of two extended visits in late 2008 and early 2009, and chart the complexities of the present-day configuration of the American-Chinese interplay.  Shaped by the codes and classifications of one's culture, personal convictions and perspectives can seem quite natural and even invisible until they are pressed up against a disparate culture with its own unique behavioral patterns and social histories.  Encouraging physical engagement, Augustine's artworks thus immerse the viewer/participant within a highly subjective space of contrasts, conundrums, and misperceptions.

These ideas are central to The Borders Within, a collaborative project and performance by Seth Augustine and Shanghai-based artist Shi Yong, documented in video and photographs.Beginning on a Monday, Augustine was blindfolded and taken by Shi Yong to an unknown location somewhere on the outskirts of Shanghai.  Blindfold removed, Augustine was confronted by a factory of Chinese laborers who were unaware of the motivations behind his arrival.  Performing hard, manual labor, and unable to speak the language, Augustine worked, lived, and ate with the Chinese laborers while earning the standard weekly wage of $48.00.  However, unlike his co-workers who see their families only once a year, Augustine remained at the site for five days.  Over this period of time he experienced a tiny fraction of their lives and attempted to find common ground with them. 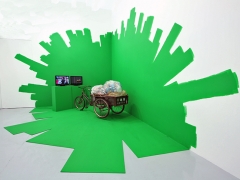 Seth Augustine
Back To Top