Combining painting and sculpture with aspects of traditional craft techniques such as embroidery, weaving, and sewing, these three artists play with scrambling notions of craft versus art, painting versus sculpture, formal versus conceptual, sublime versus mundane, as well as private versus public, allowing traditionally meticulous media to be used in expressionistic and improvisational ways that suggest layered meanings and embedded personal and transactional histories. The works included in this exhibition are engaged in a sophisticated dialogue with time and place and reveal how techniques associated with the domestic sphere can be exploited in the interpretation of history and expressions of resistance.  The choice of materials, often gathered from local craft stores and consignment shops, reflects the humble consumer sources available to everyone and helps to demystify the perception of art as an elitist cultural object with an intrinsic value reserved for luxury items.

NENA AMSLER'S labor-intensive art practice originates from a process of individuation, or finding oneself, through which the internal (emotional, psychological or spiritual) is made external.  The fine cloth, lace, and other objects that Amsler "weaves" and builds out of extruded paint draw upon the Catholic and shamanistic beliefs and rituals of her Peruvian and Swiss heritage, and explore deeply personal memories and a relationship to the making of art where meaning is revealed, or constructed, through inanimate objects.  Qhuyay—“to love" in Quechua, the native language of Peru—consists of a panel resembling the torso of a woman dressed in a linen garment, with lace of extruded acrylic paint adorning the neck and waistline.  Golden fruit flies, also created from acrylic paint, cover the dress, their wings glistening in a disquieting way.  In Tinku, Catholic iconography—a Christian cross, a cloven golden foot—is merged with a frail cloth "woven" out of extruded acrylic paint that references the shrouds used to wrap Peruvian mummies.  In Quechua, the word "tinku" is used to describe the juncture of two rivers and can mean the concept of clearly defining and recognizing opposite sides, while simultaneously establishing their independence.

MIYOSHI BAROSH'S sculptures and paintings are concerned with the institutional presentation of modern art and question the categories of "outsider" and "craft."  For her, contemporary American culture offers a paucity of substance, relying instead on clichés, stereotypes, and inspirational messages to produce meaning. The installation Paintings for the Home is composed of multiple simulated genre paintings rather than found art.  These "inauthentic" versions of stereotypical art objects of good taste have been defaced with "graffiti".  Hardly an act of iconoclasm, the graffiti is embroidered with black thread and laboriously simulates an impulsive gesture of defiance.  The act of transgression, or rebellion, has itself become inauthentic.  Two sculptures, Composition with Chair I and Composition with Chair II, characterize post-colonial and postmodern perspectives.  The chair frames, making up the sculptures' underlying structures, are, like Paintings for the Home, degenerate copies, in this case of "aristocratic French" armchairs and were manufactured at a sweat shop abroad.  Composition with Chair I and II are "drag queens at the post-structuralist's ball":  Composition I suggests a depository without proper plumbing—an imperialist commode; Composition II celebrates the "authenticity" cult of the avant-garde on modernism's decaying body.  The brute materialist is left with the body's secretions, discharges, and rotting waste held up on the frame of colonial labor.

NAVA LUBELSKI'S work explores the contradictions between the impulse to destroy and the compulsion to mend.  Juxtaposing rapid acts of destruction, such as spilling and cutting, with painstaking, restorative labor, her embroideries are hand-stitched over stains and rips, contrasting the accidental with the meticulous.  The initial marks are found on linens or are created by cutting and staining canvas. The work scrambles expressions of aggression with masochistic patience and sublimation and plays with the feminine through the graphic form of the "stain".  In Remains of the Night a tablecloth that has been stained, cut and repaired with elaborate stitching into a beautiful abstract composition contests the randomness of action painting and the utilitarian nature of craft—the prototypically ''male'' arts of paint-splashing and canvas-piercing fused to ''female'' fabric-staining and needlework.  Lubelski's work encourages a perceptual shift in the viewer, particularly a humorous one.  In a sense it is a one-line joke about the rewards of "looking closer."  The embroidered paint splatters in Battle of Britain and Epic amplify their cartoonish quality, suggesting narrative from randomness and mistake.  Every "accidental" splash and drip is, in fact, a precisely and purposefully threaded creation. 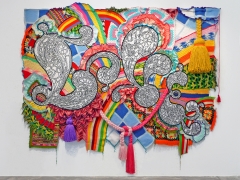