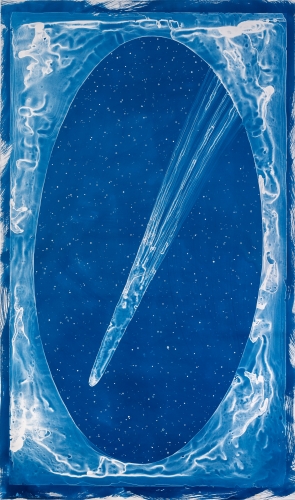 Your Body is a Space That Sees is a series of large-scale cyanotype works (approximately 6ft x 6ft) that source the fragmented history and contributions of women in astronomy to represent a female-centric astronomical catalog of craters, comets, galaxies and nebula drawing from narrative, imagery and historical accounts of a group of women known as ‘Pickering’s Harem’ or the ‘Harvard Computers’. This little-known group of up to forty women made significant influences in the field of astronomy by setting up classification systems that are still used today to measure the distance, heat and chemical content of stars and yet were paid less than half the wages of men. Harvard University houses the largest collection of astronomical glass plates in the world – over 500,000 including the very first daguerreotype every taken of the moon. Research for this series was done in partnership with the archive to identify specific plates that were studied and used by the women in the ‘Harvard Computer’ group and these plates serve as a reference for large paintings of the galaxies or stellar objects within the plate. Your Body is a Space That Sees offers an experience of the night sky through the discoveries made by these astronomers.

The cyanotypes works are created using a painting of a galaxy or stellar image on semi-transparent drafting film then pressed over paper that has been coated with light sensitive emulsion and exposed in the sun. The resulting piece is cyanotype print of the positive image in equal scale to its matching negative created without the utilization of a camera. This process mimics early astronomical glass plates moving between transparent surfaces and is multi-layered in meaning and technique: images of stars created by a star (our sun), paintings used to create a painting (light sensitive emulsion painted out and exposed by another painting). This is an expansion of a previous series titled Deep Sky Companion, which reinterprets the 18th Century French comet hunter Charles Messier’s Catalogue of Deep Sky Objects in 110 paintings and 110 photographic twins and is currently on view at Caltech’s Cahill Center for Astronomy and Astrophysics through December 18th, 2016. Cliché Verre was a process used by French painters such as such as Carot, Millet and Daubigny in the early 19th century as a method of making a photograph by painting on glass as the negative.

Successful art and science collaborations have an underlying theme of creativity and curiosity, and this project will emulate this diversity to reach a broad audience. It is intended that the catalog create an interactive interface between visual art, literature, and science. Contributors include; Dr. Janna Levin, Jennifer Oullette, Diane Ackerman, Maria Popova, Dava Sobel, and Dr. Anna Leahy, Dr. Rebecca Oppenheimer.

This project was supported by an Artworks Grant from the National Endowment for the Arts.

Installation View of Lia Halloran: Your Body is a Space That Sees

Installation View of Lia Halloran: Your Body is a Space that Sees