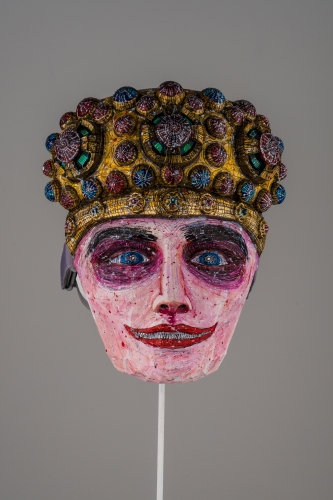 Inspired by ancient mythology, modern myth, and contemporary celebrity culture, Solmi has blended together historical characters and depicts them as ghoulish, self-indulgent, degenerate devotees of the cults of Bacchus and Dionysus concerned only with their own power and influence.

Through the absurd behavior of his characters, Solmi asks us to question their relevance and the distorted historical narratives that have led to an era of misinformation, corruption, and hypocrisy.

Solmi says of his work, “I always believed that art can be used as an effective tool for social change. Art for me it’s a vehicle to fight injustices, a tool to spread awareness and independent thinking. With my artworks I hope to inspire people to discover facts, to try to decode reality from fiction, historical truth from propaganda. One of the greatest difficulties I encountered when I moved to United States in 1999, was to decipher American history, its contradictions and inaccuracies that I often encountered in my research and reflections. I had a lot of troubles distinguishing the reality of historical facts, unequivocal, from the government propaganda told in the books. I strongly believed that only if I had been able to understand the origins of this nation, in its roots, would I one day understand the society in which I had chosen to live, and only thus one day, would I have been able to have my say.”

A catalog will be produced for The Bacchanalian Ones with an essay by celebrated author and art critic Eleanor Heartney. Ms. Heartney is an independent cultural critic and author residing in New York City. Currently, she is contributing editor for Art in America and Art Press and co-president of the American Section of the International Art Critics Association. She has written for most major cultural publications including Artnews, New Art Examiner, the Washington Post, Sculpture, and the New York Times. She recently published a new book entitled Doomsday Dreams: The Apocalyptic Imagination in Contemporary Art, which includes Federico Solmi.

Virtual Tour of the Bacchanalian Ones

Federico Solmi’s timely solo exhibition here, “The Bacchanalian Ones,” interrogates the greed and corruption of world leaders both past and present. The artist’s paintings and multimedia installations caricature his famous (and often infamous) subjects—from the realms of politics, religion, the military, and the aristocracy—by combining digital technology with the most traditional of media. Solmi’s acidic portraits reveal these renowned figures for what they really are: soulless prevaricators crazed by power.

The centerpiece is The Bathhouse, 2020, which comprises five LED screens set in a frame that’s six feet high and twenty feet wide. The video was painstakingly created using digital modeling, motion capture animation, gaming software, and scans from original paintings created by Solmi. Here the artist presents an episode of kaleidoscopic excess featuring a crowd of preening, vainglorious icons—including Idi Amin, Pope Benedict XVI, Christopher Columbus, Napoleon, and Ramesses II—who gorge themselves on a whole roasted pig and an endless supply of cocktails. This gluttony takes place in a grand hall full of fountains and statuary festooned in green, gold, and crimson, as if it were a Sadean Christmas scene exploding in gloopy slo-mo. The installation’s chilling orchestral score, composed by KwangHoon Han, heightens the work’s strange claustrophobic tone and overall sense of drama.

More immersive yet is The Dreadful Ones, 2017, a fictionalized romp through Donald Trump’s extravagant inauguration ball, which viewers experience by wearing painted, 3D-printed masks of George Washington or Empress Theodora, that contain VR headsets. The adventure begins in a limo carrying the newly-elected president, Robert E. Lee, Benito Mussolini, and other “dignitaries” to the White House, where we're greeted by applauding supplicants, balloons and bowing staff, before the leaders guzzle champagne and dance to triumphal music. It’s a dizzying experience of metaphoric cock worship and patriotic overkill—Trump’s wildest dream, and a collective nightmare.

GLASSBORO — The Rowan University Art Gallery offers a couple of reasons why people should make an appointment during a pandemic to see its newest exhibition, “The Bacchanalian Ones” by Federico Solmi, in person.

The exhibition provides a rare opportunity in South Jersey to see art enhanced by augmented and virtual reality.

The show, which runs through Jan. 16, also is the first solo exhibition of the Italian native’s work in South Jersey. Solmi, 47, is an important and established artist, said Mary Salvante, director of the Rowan gallery and curator of the exhibition.

“This is an artist that you only otherwise see in New York City or Los Angeles or Milan, Italy, or Germany, which are some of the other cities and countries where his work has been shown,” Salvante said.

Nine of Solmi’s pieces are featured in the exhibit.

All of the art is united by Solmi’s use of bright colors and the ghoulish aura he lends to both his human and animal characters by having their teeth sharpened as if they are ready to devour the viewer at any second.

The most elaborate piece is titled “The Dreadful Ones,” from 2017, which has been augmented with virtual reality for its Rowan showing. The viewer puts on a 3D-printed mask that was hand-painted by Solmi. At the back of the mask, where the eyes are, is a virtual reality headset.

“When viewing the VR with the mask on, you are essentially embodying the spirit of that character, and you become part of this elaborate theatrical performance that the artist has created and envisioned,” Salvante said.

Once the mask and the VR headset are secure on the viewer’s face, museum visitors will feel as if they are riding along with President Donald J. Trump, Confederate Gen. Robert E. Lee and Italian dictator Roberto Mussolini, waving to adoring crowds and smoking cigars.

Those experiencing “The Dreadful Ones” will see a presidential portrait and then enter a ballroom where each leader will dance on the presidential seal before the loop ends.

Shreekanth Mandayam, Rowan’s professor of electrical and computer engineering, consulted on the technical needs of the exhibit. His team refined the VR mask design and printed them.

The process of designing the masks to accommodate a VR headset meant back-and-forth communication among Mandayam’s team, the VR laboratory, Solmi and his studio, Mandayam said.

“I thought it was very inventive and imaginative,” said Mandayam about Solmi’s exhibit.

Because of the interdisciplinary nature of Solmi’s work, it is hard to figure how it is created just by looking at it.

“The Bathhouse” is brand new for this exhibition. It started off as paintings, but the paintings have been manipulated by computer software. Some of the figures in the close to 10-minute video were created through motion capture, the same technique actor Andy Serkis used to create the Gollum character in 2001’s “The Lord of the Rings: The Fellowship of the Ring.”

“The Bathhouse” is viewed through five LED screens that are placed in a frame that is 6 feet high and 20 feet wide.

Solmi’s work first captured Salvante’s attention two years ago at the Armory in New York City. She was impressed by the quality of his animation and his artistry in his approach to video.

When she decided to focus on the theme of technology and the arts for the gallery this year, that’s when she realized Solmi would be perfect for Rowan.

Solmi has several museum solo exhibitions scheduled for next year, including at the Block Museum of Northwestern University in Evanston, Illinois, and the Tucson Museum of Art in Arizona.

Solmi is a satirist, Salvante said. He pokes fun at historical figures and plays with the idea of them being idolized, she said. The zombified way the historical figures are rendered, with their wide-eyed stares, will strike some as cartoonish, while other people will find the same work unsettling.

“We are an educational institution. We all have a mission to instill in students notions of questioning authority, investigating information to come to your own decision and to come to your own conclusion about what you believe,” Salvante said. “The university art gallery is an extension of the classroom.”