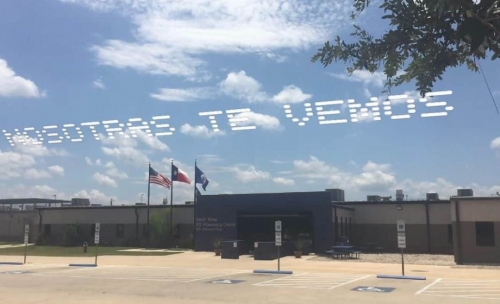 An AR still from the 4th Wall app of Zackary Drucker's “Nosotras Te Vemos” (We see you) at the South Texas Detention Complex that was part of In Plain Sight. Credit: Zackary Drucker via The New York Times

Today, there are more than 200 Immigration and Customs Enforcement detention centers throughout the United States. But these detention centers—along with the forgotten buildings and land sites that were once home to U.S. government-run internment camps, immigration courts, and border patrol centers—are mostly hidden from plain sight, tucked away from our collective consciousness. According to an October 2019 report by the ACLU, more than 5,400 children have been separated from their parents at the Mexico border since 2017. As of May 2020, some 25,421 people are locked up in these immigrant detention centers around the country. And as of January of this year, 81% of people detained in ICE custody nationwide are being held in detention centers owned by private prison corporations.

Over the weekend, July Fourth celebrations were underscored by this immigration crisis and a political and social revolution currently underway, one that sees the nation reckoning with⁠ its deeply rooted racism, systemic inequality, and prison industrial complex. While many protested the holiday, others took to social media to lament our lack of progress, with many citing abolitionist Frederick Douglass’s speech “What to a Slave Is the Fourth of July?” In a different kind of show of solidarity and advocacy, a group of 80 artists, including Dread Scott, Narcissister, and Zackary Drucker, used their own words to shine a light on the detention centers holding immigrants whose liberty and freedom are still restricted.

Led by the artists Cassils and rafa esparza, the project is titled In Plain Sight. A group of organizers—including artist Hank Willis Thomas, Black Lives Matter cofounder Patrisse Cullors, and lawyer Chase Strangio—formed a coalition more than a year ago and asked 80 artists to create phrases or words that speak to the immigration issues in the U.S. They then commissioned the largest fleet of skywriting planes in the country, called Skytypers, to fly over 80 sites in the U.S., including former internment camps, ICE detention centers, and Ellis Island. The skywritten phrases displayed were in 20 different languages and included “Shame #Defundhate” and “Soy Nube De Esperanza,” which translates to “I am a cloud of hope.”

The skywriting began on July 3 and will continue through this week. A corresponding website and interactive map called #XMap (the hashtag displayed with every phrase) supply more information about the flyover sites; you can also type in your address and find out where or if immigrants are being detained in your local community. In Plain Sight has also partnered with various organizations to which visitors on the site can donate. They include immigrant bond funds as well as the #MeltICE Freedom Fund, Free Our Neighbors, and the Immigration Liberation Fund. Additional organizations available to join through the website include the #FreeThemAll Campaign and #AbolishICE.

All of the artists involved are from immigrant families or are immigrants themselves. esparza’s parents came to the U.S. from Mexico, and Cassils spent nearly 20 years trying to achieve U.S. citizenship and had a black mark on their passport for more than a decade for being gender nonconforming and thought to be a suspicious person while traveling. Additionally, several of the artists are DACA recipients. “For me, this was really about us trying to figure out a way of visualizing this invisible, abject, horrific problem which is immigrant detention,” Cassils explained to Vogue late last week. “This project became about how do we create a visual representation of all of these camps and detention centers that are hiding in plain sight?” They added: “raf and I both feel that if people knew the numbers, they would actually rise up and say, ‘No, this can’t be, we don’t want this.’ This is about using art in the service of all the incredible work that’s already been done by people on the ground, by our partners.”

The planes type the words in a 20-mile diameter halo that hovers above certain areas, which can be viewed by millions of people before getting picked up on the news or social media. It is “like an air show,” esparza says, something as big and loud as a typical fireworks display or parade celebrating America’s birth. That’s the entire point, according to Cassils and esparza: for a huge, diverse coalition to reach a huge and diverse audience across the country. “We have Japanese Americans descended from those who were incarcerated,” Cassils says. “We have artists who come from descendants that survived the Holocaust. We have quite a few indigenous artists, artists who lived through and survived the AIDS crisis and can speak to having a president who doesn’t care about the plague and the way that it affects the body. And we have many Black artists who are critiquing the prison industrial complex.”

For Cassils, and all the artists involved, timing is everything: “On the Fourth of July especially, through this grandiose display of skywriting, we feel like this is a patriotic act for artists to really raise their voices and then we can ask ourselves: ‘What does it mean to celebrate America today?’”

Below, a few of the artists of the In Plain Sight project share their thoughts behind their skywriting messages in the hope of a truly free future.

There are currently over 66 million displaced people throughout the world. Migrants are part of humanity and have much to contribute. America is a country that stole the land from Indigenous people and stole people from Africa to work that land. They have absolutely no right to tell people that borders are sacred. I’m outraged that this government demonizes and criminalizes people trying to feed their families. I can’t stand that they put children in cages and separate families. Its detention facilities are a nightmare, and American immigration policy is literally killing people. The idea of an ephemeral skywritten project to shine a light on these atrocities is poetic and beautiful. Artists frequently work on a small size, and the scale of IPS is countrywide and something that will be seen by millions. My message is Carlos Ernesto Escobar Mejia. This is the name of the first immigrant to die in U.S. detention from COVID-19. —Dread Scott

"Nosotras te vemos means 'we see you' in the feminine version of the phrase, a subtle way of recognizing one femme to another. I want to convey a message of unity to the transgender women and to all the people living in forced detention at South Texas ICE Processing Center.

During the Obama administration, while addressing the proposed legislation of North Carolina to bar trans students from restrooms that correlated with their gender presentation, then attorney general Loretta Lynch said to transgender Americans, 'We see you, we stand with you, and we will do everything we can to protect you going forward.' It was an incredible moment historically because trans people had never been spoken to so publicly. To have a person from the president’s cabinet speak directly to a community that had been ignored and silenced was such a powerful paradigm shift and validation. "

My skywriting message is “Welcome mashi.” I was partnered with the immigration field office site in Newark for my skywriting message. Newark is a city in New Jersey that has a big population of Ecuadorians. During my immigrant-organizing times and working on deportation cases, I remember the lack of aid for Indigenous migrants who were in detention centers. Often not being able to speak Spanish, many of these Indigenous folks could not get the proper legal support.

As someone who is Kañari from Ecuador, I am drawn to the Kichwa word mashi, which translates to “friend.” I am holding Noemi Álvarez Quillay’s death in mind, a 12-year-old Indigenous girl from Ecuador who hanged herself when she was caught at the border. I am thinking about all the unaccompanied minors in detention centers across the country. I am thinking about the anti-immigrant rhetoric, white supremacy culture, draconian immigration laws that impact migrants directly in how they get to live in this world and make them question their worth as human beings. I am thinking about the tender words I would have loved to hear growing up instead of being called illegal by politicians, racists across the country, and news outlets. I wonder what a world would look like if there were no borders, no detention centers.

Maybe in that world we would hear “welcome friend, welcome mashi” as they make their way into this country with their freedom still intact, reuniting with their loved ones and greeted tenderly into our communities. Instead of detention centers, we have beautiful freedom centers where migrants are met by healers, health care providers, and helpers who speak multiple languages. Here they are given warm clothes and fresh food from local farms. And children are reunited with their parents. And migrant children have childhoods. My skywriting message is my offering to other Indigenous migrants, especially those from South and Central America. Here in the sky, we meet in our language. —Sonia Guiñansaca

View Vogue.com
Back To Top