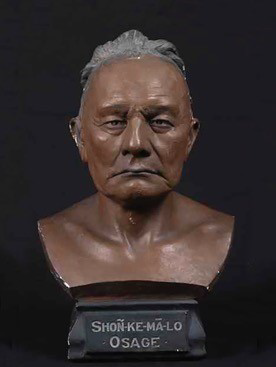 The gallery is pleased to announce that The Smithsonian and The National Museum of Natural History are co-hosting a talk about historical objects from their respective collections. This talk will focus on civic awareness about the conservation of art history and material culture. For the talk, Ken Gonzales-Day’s photograph of Osage leader, Shonke Mon-thi^ and a 3D printed replica of a Tlingit clan crest hat will be starting point of the discussion. Both objects offer insight into the ways museums have used Indigenous objects to further colonialism as well as the Smithsonian’s recent efforts at cultural restoration.

The talk will take place via Zoom on Thursday, June 10 from 2:00 PM- 3:00 PM PDT. In order to participate, an RSVP via Eventbrite will be required.

The image of Shonke Mon thi^ is part of Gonzales-Day’s series Profiled (2008–present), in which the artist photographs figurative sculptures in American and European museum collections in order to explore conceptions of racial difference and beauty in art. By displaying the sculptures against stark backgrounds, the artist reveals the differences in how white bodies and bodies of color are portrayed, contextualized and interpreted. In 2014, under the auspices of a Smithsonian Artist Residency Fellowship, Gonzales-Day documented the representation of Native American historical figures in the Smithsonian Institution’s collections. He found very few indigenous sitters in the Portrait Gallery’s sculptural holdings. By contrast, a multitude of sculptures at the National Museum of Natural History represent Native Americans. The vast majority of these works, including the bust of Shonke Mon thi^, were based on molds made from the faces of living individuals.

More information about the Portrait of Shonke Mon thi^ can be read about on the National Portrait Gallery's Blog.

RSVP ON EVENTBRITE
Back To Top