High Line explores the line as independent, idealized objects that, far from being abstract symbols and primitive concepts, are rooted in objective and subjective personal experience—its character and very existence determined by real and imagined forces often working in opposition to each other.

In her new work, Molly Larkey continues her interest in the idea of an alternative “imaginary” language by exploring the very form of language—letters, symbols, words, drawing, writing—as the basis for her sculptural and painted works. For Larkey, this imaginary language is related to being a queer person and imagining a queer utopia, and it can be hinted at or brought closer to ones field of vision and experience through art. The idea of an imaginary language and an imagined queer utopia can be seen in relation to modernism and the utopian ideals around the various modernist movements, which related art and aesthetics to a vision of an alternative form of society. It imagines art as an alternative kind of language with the power to alter our ability to communicate, opening up different ways of apprehending and describing the world, and changing how we behave with oneanother and function in the world. Larkey’s “queer” language of forms, however, proposes a system of signs that does not conform to the mandates of cultural logics, and, particularly, not the didactic, categorical, exclusionary, rigid, male-centric model of modernism and its entailing hierarchies. Her new wall sculptures do that on an individual level—they literally change shape depending on where one is standing in relation to them. Wrapped in linen, painted, and hung on the wall, they are clearly meant to be read as paintings, yet they refuse to be fixed or held down into one category of meaning or signification. They are dynamic and require the viewer to look at them with a dynamic, open frame of mind.

Leonardo Bravo’s works on paper draw on specific modernist and minimalist geometric forms to depict complex structures and systems that suggest a fluid and constant state of unfolding. Influenced by his upbringing in thepolitically charged climate of his native Chile in the 1970’s and a variety of other sources (including the Bauhaus weavings of Anni Albers and Gunta Stolzl, the wall drawings of Sol Lewitt, the works of Helio Oiticica, and traditional Indian miniatures), Bravo sees these visual structures as reflective of the trajectory or arc in which social movements are formed, operate, disperse, and ultimately collapse.

The works are akin to a visual mapping of specific cultural or historical cornerstone moments that pushed for struggle and resistance, such as liberation movements in Africa and Latin America, student uprisings in the late twentieth century, and the artists’ ownpersonal mythology of boundary traversing moments, as is the case of Larry Levan (the legendary DJ of NYC’sParadise Garage) holding a crowd in absolute heightened states of rapture and exuberance. Through the inherent tension between lines, colors, and space these works suggest pathways to the utopian idealism of many liberal, progressive, and forward thinking movements.

Born in Santiago, Chile, Leonardo Bravo earned his BFA from OTIS and his MFA from the University of Southern California. He lives and works in Los Angeles.

Anne McCaddon’s recent work references decorative and optical patterns from textiles, wallpaper, 1960s prints, quilt design and faux finish decoration. Simple printing, sponging, collaging, and blurring techniques are favored with very little direct brush to canvas application. When the brush is applied it explores a calligraphic and cartoon styled line. These lines parade around enclosing the open white space of the canvas in dips, waves, and roundabouts, sometimes even acting as containers for ornamentation. The comic character of her line, the“sticker” effect of her collaging, and her application of patterns playfully distorts space, obliterate underlying imagery, create camouflage, and form curiosities. The imagery in these paintings folds, hides, flips, inverts and pulses, unwinding the static boundaries of two-dimensional representation presenting a comic relationship abstraction. 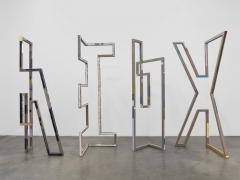 Molly Larkey
Back To Top