Everything we shut our eyes to, everything we run away from, everything we deny, denigrate or despise, serves to defeat us in the end. What seems nasty, painful, evil, can become a source of beauty, joy, and strength if faced with an open mind.

Martin Durazo grew up in Los Angeles in the late 1980s during the seminal years of the Los Angeles punk rock scene.  The music of Black Flag, Fear, and the Bad Brains—an expression of nonconformity and rebellion against mainstream culture and ideology—continue to fuel his artwork.  Durazo is known for creating large-scale installations combining painting, sculpture, ready-made objects, video, sound, light, and performance that mine the intersection between elements of high-design and the “aesthetic of the illicit”.

Points of Entry, his debut exhibition with Luis De Jesus Los Angeles, is an exploration of the symbiotic relationship between the sacred and the profane, the lurid and the spiritual, and, as in most of the artist’s previous work, the taboo and the socially acceptable.  All are foils to each other and all are meditations on deep-seated roots of moral and immoral behavior, depending on the lens by which they are viewed. The subject matter encompasses the socio-sexual realms of Mexican beauty queens turned narco drug “mules”, gay cruising signifiers, and S&M fashion’s influence upon punk and heavy metal culture—juxtaposed with spiritual symbolism and notions of transcendence.

The works created for this exhibition take the form of hybrid wall objects of painted and collaged imagery on polished stainless steel — a material traditionally associated with correctional facilities and health institutions, as well as bondage and disciplinary devices.

At the heart of the work is the title Points of Entry that is tied to the lurid through allusions of sexual and mental penetration and binds the experimental with notions of excitement, fear, and triumph. Referencing fetish sub-cultures and situational narcissism, Durazo’s formal-conceptual project employs the pervasive use of black rubber painted on steel, incorporating a range of shapes and iconography — orbs, glory holes and various sex toys/ephemera — that convey spiritual and ritualistic energy, while negotiating a revisionist (subversive) brand of neo-minimalist aesthetic. Taking inspiration from the Bret Easton Ellis novel Lunar Park, where intense situational narcissism (ISM) was blamed for the main character’s recurring drug addiction and abhorrent behavior, Durazo’s use of the polished mirrored steel speaks to relational aesthetics by having the viewer’s own corporeality and narcissistic tendencies compete with the experience of the artist’s mark. The result is a darkly painted boundary-crossing confrontation that pits personal ethics and moral choices against the glossy manipulations and elitist trappings of modern culture. 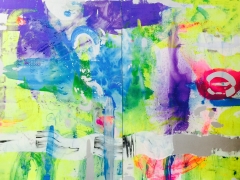 Martin Durazo
Back To Top