Invested in an ongoing interrogation of language and the consequences of its translation, across terrains and cultures, Marcos Ramírez ERRE’s works intimately negotiate the subject and the object, history and memory, aesthetics and politics, the local and the global, and the personal and the collective.  Posing questions about the relationship between art and audience, ERRE’s works transform spectators into implicated subjects charged with the responsibility of taking an active role in producing the tensions expressed by the works.

ERRE’s new series of works, entitled Playing Series Serious, uses humor, word play, and the format of crossword, game search, Sudoku, labyrinth, and maze puzzles to continue his strategic appropriation of language-based signage.  His work addresses the internalization of politics into the habitual vernacular of the everyday.  Testing the limits of cognition as well as the conventions of word and sign puzzles, Playing Series Serious also explores translation, misunderstanding and the impossibility of choosing to recognize what is hiding in plain sight.

Rational choice dictates that the decisions we make are directed towards finding the most efficient solution to a problem that will also cause the greatest good.  ERRE’s Playing Series Seriousbrings us face to face with the real contradictions inherent in making any kind of choice let alone a positive one, whether personal or political, as he challenges the viewer to resolve puzzle and word-games that confront loaded political statements juxtaposed with their grammatical dissolution into image.  Just as in politics, Playing Series Serious teasingly prompts us to restore order by electing to play the game and engage our logical and emotive apparatus in exercises of conscious seeing. 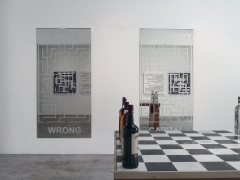 Marcos Ramirez ERRE
Back To Top