Time is slipping.  A moment ago this image stood alone. Now it catches against that other one. It flips upside down. The pixels snag, are turned into paint. One pixel becomes liquid and is stretched, poured, smoothed over the surface of the image. With digital tools, one photograph is painted into the fabric of another. Two moments appear as parallel visions, torn and spliced together.

Through a process of reduction and transformation, Kate Bonner’s work withholds explanation and proposes simple fictions. Using digital brushes, power tools, and a language of fragmentation, she seeks to expand space, to break through the surface of the image. Her work is an attempt to see in, around and under images.  It questions limits and points of entry.

Kate Bonner began this process of questioning with progress shots and reference photos of drawings and paintings.  In these off-frame photos, and later scans and photocopies, she sought out objects that could operate as mere objects rather than symbols.  She began cutting apart photographs, folding them, rolling them, and flipping them around in an attempt to use representational imagery for formal, abstract purposes; to deny a story.

In Possible Event, multiple images are located in one frame. The images are points in time, spliced into a location.  As moments, the images compete with each other, and submit to each other inside the confines of a flattened plane.  Each piece has a front and a back; mounted rather than framed, they operate like snapshots – folding, bending, leaning.  There are borders and frames inside the image (both around the rims of the photographs, and around the edge of the digital print), while cuts and folds in the work turn the room into an even larger frame. Discarding any distinction between sculpture, photography, and installation, Kate Bonner acknowledges our human desire to investigate, to know, to mentally construct, while simultaneously confounding it. 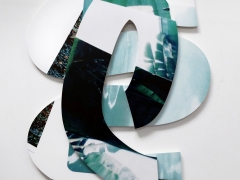