Federico Solmi
The State of the Union, 2012
Acrylic, ink, gold leaf on paper mounted on wood panel
11 x 17 in. 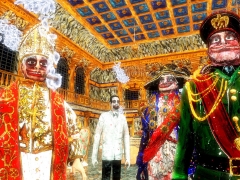