In his work, CHRIS BARNARD wrestles with the politics of contemporary landscape painting, which, for him, is focused on the relationship between romantic represen- tations of the “American” landscape and the ideologies that have long fueled U.S. aggression and violence.

Often characterized by wide vistas, dramatic light, and stunning terrain, the works of 19th Century landscape painters like Albert Bierstadt or Frederic Edwin Church depict the landscape of the continental United States as grand, transcendent, and even sublime. Painted from and for a European-American point of view these works, however, reflect and project a colonial gaze — one that promotes the abundance and promise of the American West and celebrates the ideology of ‘Manifest Des- tiny’. Conversely, these paintings can also be considered within the larger scheme of exploitation that has long characterized the history of this land, obscuring the deception, displacement and acts of crimes against its indigenous inhabitants and others deeply connected to it. Even as he is drawn to these iconic paintings, he is also troubled by them — the darkness in their light, the horror in their splendor.

Barnard’s current body of work explores these contradictions. In these paintings, he engages questions of light and dark, truth and fiction, substance and surface, reality and mythology. To address these concerns, he evokes the expansive and reverential atmosphere of romantic landscape painting, which he in turn undermines by layering images and materials (for example, re-framing ‘heavenly’ light and the color white as forces of darkness and portents of sorrow).These works also incor- porate various levels of representation; some are tightly rendered and others are painted more loosely with abstract mark-making, saturated colors, and thick, dried paint scrapings. Through this manipulation of formal and conceptual tropes, viewers are left wondering what it is they are looking at and why. All of them are created to suggest struggle — among and between imagery, materials, intents, and processes — and to provoke critical thought.

After producing paintings on canvas for many years, in the mid-2000s MARGIE LIVINGSTON began pouring paint, layering it, cutting it, and breaking it apart in order to construct objects that are images of their own making—hybrid works that shift back and forth between sculpture and painting as well as abstraction and representation. Livingston’s practice is grounded in Clement Greenberg’s Modernist narrative about an increasingly self-reflexive approach to the materiality of painting, modified through the inventions of Lynda Benglis and Linda Besemer. Her works reference and build on that story, just as they reference and build on the tactile and visual qualities in which she is deeply invested. And yet, while these works are abstract, rooted both in process and in conceptual reference, they also resemble objects in the world. In this sense, Livingston breaks two cardinal rules of modernist painting: she makes objects that are images of other objects, and in the process of doing so she tells a story.

Livingston’s early canvas paintings (late 1990s–mid-2000s) showed her fascination with German Romanticism [in 2001 she spent a year living and working in Berlin on a Fulbright scholarship], and used a complex system of three-dimensional grids to construct evocative, luminous spaces in which fragments of tree branches dissolved into abstraction. It poised the metaphysics of nature against the artifice of culture and industry, and in some ways this sense of ruin was echoed by the state of flux in the paintings’ formal structure. The work, with its grid-making, reflected the practice of the archaeologist who marks out a site on the ground (not unlike the ground of a painting) and grids it out before digging down through strata of earth and time. Livingston’s current work continues to exhibit the tension between nature and culture that artists have been grappling with since the Industrial Revolution. Nevertheless, Livingston hasn’t eliminated the ground completely. The white that in her earlier paintings would have functioned as a background serves to position the new work within a “contemporary sublime” of plastic beauty that is “androgynous” and “transitive,”[1] leaving behind the Romantic attachment to nature’s mythic truths. 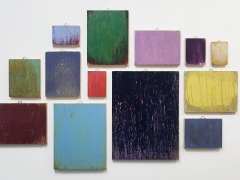 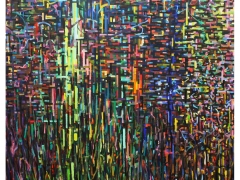 Chris Barnard
Back To Top