Primarily working in the medium of drawing, Iowa and Los Angeles-based artist Dennis Koch makes meticulously structured abstract works inspired by the fields of physics, cosmology, dimensional mathematics, and parapsychology.  Koch contemplates the properties of rotating spheres and the perception of light in his ongoing Versor Parallel series of color pencil drawings. Each drawing presents a set of vortices circumscribed to create an exponential matrix of triangles, sometimes interrupted by prismatic refractions. The Versor Parallelsare an allegory for the kaleidoscopic combination of the twelve Jungian archetypes within people as well as the cosmological myth of our solar system having once been inhabited by twelve planets.

Native Angeleno artist June Edmonds makes abstract paintings that explore how color, repetition, movement, and balance can serve as conduits to spiritual contemplation and interpersonal connection. Edmonds's new flag paintings represent the alignment of multiple identities including race, nationality, gender, and political leanings. Each flag references historic or current American events and is created in part to bring attention to individual Black Americans. Work Harder Flag (2019) is inspired by a speech made by Stacey Abrams, the former Georgia Gubernatorial candidate, in which she describes the need for civic responsibility to expand beyond elections in order to combat voter suppression and elected officials that don't "share our values".

Montreal and Los Angeles-based artist Nicolas Grenier’s interests lie in the distorted connections between the many systems we inhabit—political, economic, cultural and social—and the principles (or absence of principles) at the root of these systems. His artworks translate these theoretical, philosophical problems into a visual system. Using the language of architecture, urban planning, and diagrams, Grenier imagines absurd or perverse models that are not incongruous with the mechanisms by which organic elements are integrated into structured wholes: households, communities, countries, maps, and policies. The result of these explorations could be described as a multilayered critique of society, a social and structural hallucination that hovers between irony, cynicism, and political engagement.

Wellesly, MA and Brooklyn-based artist Alexandria Smith’s practice is responsive to notions of cultural difference and is defined by a unique relationship to the body. Utilizing her own archive of completed work, she creates new images through a regenerative collage process employing the use of various painting and printmaking methods to create new symbols, systems, and meanings. In her recent works, figures dominate the canvas. Emerging from and intertwining with graphic and pictorial space, these beings explore concepts of hybridity, duality, and environmental influences on development. The figures are simultaneously mirror images and twins, evoking religious, spiritual, and sexual states of being.

Delaware-based artist Peter Williams paints from personal experience, creating bodies of work inspired by the communities he has lived in throughout his life including upstate New York, Albuquerque, Detroit, and Baltimore. In his vibrant paintings, Williams speaks to the violence of contemporary Black life in America and the myths and heroes that are formed in public perception. Williams states: "my sense of negrossity is one of empowerment," ascribing a studio practice that aims to bear witness to evil while inspiring hope. Lost Flag of New Africa (2019) presents a quilt-like flag of ideas about African textiles, colors, and textures. Williams complicates the pre-existing movements and styles, overlaying the vertical bars (referencing a prison environment) onto the irrationality of cubism and the institutional validation of the grid. 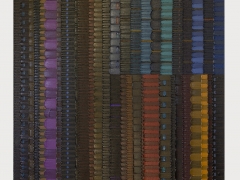 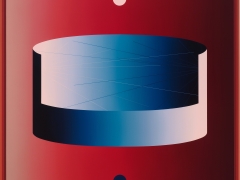 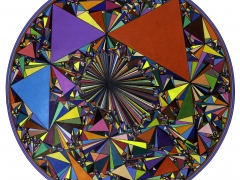 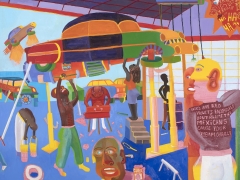 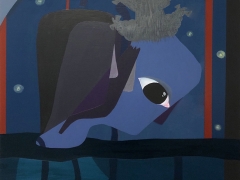 Alexandria Smith
Back To Top